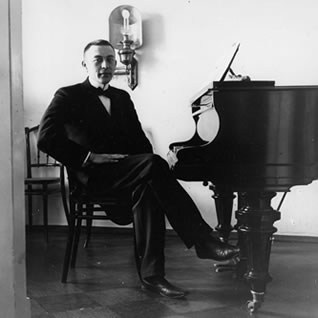 The name Russian Rhapsody came to my mind long before I had enough money to start my company.

Once in September, 5 years ago, I thought, “If I had my company I would call it “Russian Rhapsody”…

Two months later, all of a sudden my old friend called me to have a chat and, among other things he asked me, “Why with all your long experience you hasn’t not started a company yet?” – “I don’t have enough money to run a company” was my answer.

“I will give you the money”, he said and I had the name already!!!

The next moment I hesitated if it was the proper name for a company. On a Sunday morning, googling, I found out that one of the world’s best composers, Sergey Rachmaninov, at the age of 18 wrote a piece for two pianos, a variation on Russian Folk songs. In fact, it was quite a special occasion as at that time musical critics strongly believed that apart from French, Hungarian and German folk pieces,  Russian folk music cannot be interpreted in a classical form.  However, young Rachmaninov managed to accomplish that task.

It was a nice event when two young pianists, Conservatory graduates, Sergey and Josef Lh?vinne performed at the Graduation Concert on October 29, 1891.

Said to myself WOW! It’s exactly what I want the spirit of my company to be – modern international thinking combined with the Russian soul, contemporary business approaches based on our rich history and culture.

And… I love Rachmaninov music – what a match!